Carlos Tevez with all three goals in Manchester City’s 3-0 win over Wigan.

Tevez is having his best season ever in England and is another Argentine forward in Europe that is in top goal scoring form at the moment.

Gaby Milito, fully recovered and back in form with Barcelona.

Will he make the World Cup squad?

The poll this week is about the Argentina midfield.

As seen again in the friendly against Germany, the national team seriously lacks creative play in the middle, it is struggling with its play buildup and the ability to make successful attacking runs.

It is a serious issue heading into the World Cup.

So, which players do you think would give a boost to Argentina’s attack?

Which players would immediately help Argentina with its play buildup?

You can choose two players.

Pipita Higuain with a goal in Madrid’s 3-2 win over Atletico. 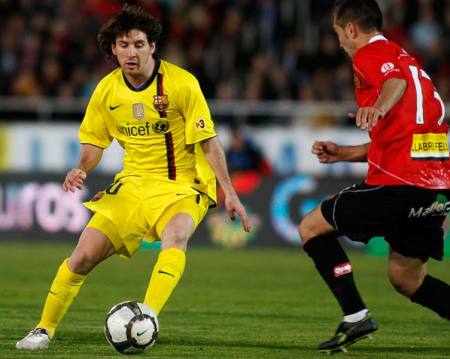 Hypnotic Lionel Messi has defences believing a tackle is a violation

Defenders retreat, crouch and stiffen like threatened animals when confronted by Barcelona’s magician

In October 2000 Barcelona’s technical director, Carles “Charly” Rexach, returned from the Sydney Olympics to watch a youth match organised to help the club decide whether a tiny Argentinian boy known as “The Flea” was worth the gamble.

Rexach finished his meal and arrived five minutes late, working his way round Barça’s complex of training pitches to join the coaches watching the cadets and first-year students at play. In Luca Caioli’s book on the biggest (and smallest) obstacle between Arsenal and the Champions League semi-finals, Rexach says: “By the time I sat down on the bench I had already made my decision. I said to Rife and Migueli [the youth team coaches]: ‘We have to sign him. Now.'”

What Rexach saw was complete freedom of expression. As hyperbolic groping and extraterrestrial imagery become the norm in conversations about Lionel “Leo” Messi, a single word in Caioli’s account is luminous. A youth team coach from Newell’s Old Boys, the Argentinian club that lost him to Barcelona 10 years ago, says in Messi – The Inside Story of the Boy Who Became a Legend: “What was his playing style? The same as it is now – free.”

This is our connection to Wayne Rooney, and to Cristiano Ronaldo, who is to the White Enemy of Real Madrid what Messi is to Catalonia: the personification of football’s noble urge to carry the freedom of the street game into the cathedrals of a sport that is otherwise over-choreographed and over-commercialised.

This trinity of Argentinian, English and Portuguese talent has come to look this season like a gilded age of sub-25-year-old maestros who, unlike Pelé, Eusébio or even Johan Cruyff and George Best, are always instantly available on satellite and cable or through two mouse-clicks on YouTube, where Messi’s recent spurt of radiant goals for Arsenal’s opponents on Wednesday induce giddiness and awe.

Messi, who is still only 22, has 36 goals from 46 appearances in all competitions this year, but the spring-time flourish Catalans are so mesmerised by started with a second-half hat‑trick against Valencia, before two against Stuttgart in the Champions League and a further trio at Real Zaragoza’s expense last weekend. A quieter display against Osasuna in midweek kept the thesaurus on the shelf for one night but Arsenal’s flowing style is unlikely to cause him to think a tie against Arsène Wenger’s team offers an unpromising stage on which to extend his rampage.

At a cost in salary of £29m, Barcelona have achieved the fusion of a street style (the dodge, the feint, the swerve, the side-step and the dash) with the classical sweeping pattern with which Blaugrana teams attack. Rexach says he saw “a kid who was very small, but different, with incredible self‑confidence, agile, fast, technically polished, who could run flat out with the ball and who was capable of swerving round whoever stood in his way”.

A product of expensive hormone growth treatment in his childhood years, Messi comes from a bottle, but more as a genie than a beneficiary of human engineering. So this is a story not only of football’s most life-affirming urge lighting up the game but one of physical limitations overcome: of the Lilliputian excelling in a land of gym‑honed titans.

Watch the flurry of Messi slaloms and you see mass resignation among defenders. The joy-killer’s instinct is to shout “tackle him” at the screen but of course they can’t. Chelsea are one of the few sides to have succeeded in corralling him into dead ends, but that was a year ago and now La Liga defenders appear too discombobulated to intervene properly when he is on one of his missions. Watch them retreat, see them crouch and stiffen like threatened animals.

So hypnotic is his effect on opponents that you wonder whether some in Spain are afflicted by an internal voice that says to halt something so beautiful would amount to a violation. Through the ages the most sublimely able footballers have been chopped, barged and pulled by those in charge of negation, but The Flea survives as an incorrigible dribbler, like George Best, who endured far more in the way of sadistic tackling.

Messi is a speeded-up Maradona but without the strategic vision of Argentina’s greatest player. As with another United immortal, Ryan Giggs, his most precious asset was instantly recognisable to the kind of football men who sift tens of thousands of names in search of the one who can set off from inside his own half and circumvent six or seven ambushes, as Messi did against Getafe in 2007: a goal that eerily reprised Maradona’s against England in the 1986 World Cup.

We saw only glimpses of football’s older icons. Their appearances were rationed. Pelé disappeared back to Santos in Brazil between World Cups. The gift of our age is to watch Messi almost as a wraparound experience, and to see the exasperation of those he leaves in vapour trails: an almost comic despair to accompany our delight.

Picture of the Day

Martin Demichelis made his return from injury in Bayern Munich’s 2-1 loss to Stuttgart.

Picture of the Day |

Pasión Albiceleste
Create a free website or blog at WordPress.com.