Since it is all about Messi these days.

Here’s a compilation of the majority of the goals scored, so far, by Messi with Argentina & Barcelona.

Messi on the cover of ESPN magazine

I went in to the local Barnes & Noble store where I live yesterday and as I was browsing around the magazine racks I came across the latest issue of ESPN the magazine with Messi on the cover.

Messi on the cover of an American sports magazine, in particular a magazine that don’t really focus on international football.

Maybe I shouldn’t be surprised but I was.

By scoring a goal in yesterday’s final Messi became the top goal scorer in the 2008/09 Champions League.

Another great accomplishment to add to an already unforgettable season.

A fantastic goal and a header to top it all off.

A beautiful, historic goal by Messi that will be remembered forever.

More Messi, check him out in this new Adidas commercial. 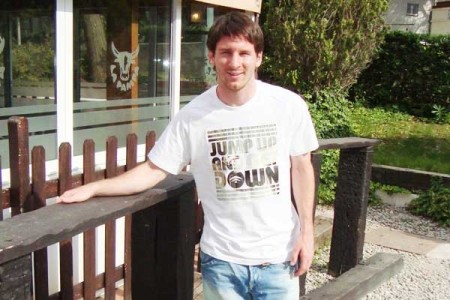 In today’s edition of La Nacion an interview with Lio Messi.

Q – The city (Barcelona) is in commotion with the final against Manchester. How are you taking it these days?

M – Calmly. These are days of festivity and of responsibility at the same time.

At times, the days get long. I don’t answer my phone so that people don’t talk to me about the same topic but it’s inevitable. I only answer when its my family. I can’t wait anymore until game day arrives and I hope that we are able to give happiness to the people of Barcelona.

Q – The festivities for winning the league and the King’s Cup had you as one of the main participants. Can you explain to the Argentine people what happened?

M – It was a deserved celebration after winning two titles. The club decided that there had to be a party after the game with Osasuna and the truth is, it was beautiful. When the people were chanting my name and my teammates asked me to take the microphone, my legs were trembling. It’s not easy to speak in front of a Camp Nou filled to capacity. Now there is one more title left and we’ll see what happens.

Q – The Barcelona fans appreciate you because you are from the club’s youth ranks. You are kind of like the face of this Barcelona. Was this your best year?

M – In many regards, this was my best year. I didn’t have to lament any injuries and I was in good form. Because of football, team play and the goals scored. What I want the most is to crown everything with the Champions. I hope to achieve that dream.

Q – Is winning the treble your obsession?

M – It’s everyone’s. At first, we didn’t think of that. It’s like we wanted to go little by little. Now that we have the Cup and La Liga, we’re going for the Champions. It is something to live instensely for and I want to win it.

Q – If that happens, you’d be in the running to be number one. Do you think about it?

M – I don’t think about that. It’s something that you all talk about, the media. It is a game that one does not participate in. I enter the field to play, do the best possible and to see Barcelona win.

Q – How many times have you been asked about the duel with Cristiano Ronaldo?

M – Two hundred thousand times and I think I’m coming up short. So, I hope that you will be original and not ask me.

Q – I wasn’t thinking of doing that….

M – It’s a media matter. There is nothing personal. If after the game him or me win any personal awards, it would just be a bonus. But the important thing is to be the champion and lift the cup.

Q – Do you have a relationship with him?

M – We’ve seen each other very few times, he’s a great player, that can win a game at any moment, he has alot of talent and has an impressive long distance kick, he’s complete. Just like his team, he likes to play with the ball on the ground and is fast in the counter attacks.

Q – How do you think the Argentine fan will take the game?

M – I don’t know, on one side, there’ll be me and on the other, Carlitos (Tevez). I think they’ll root for both of us. I really don’t know. The way that Barcelona plays put alot of people on our side.

I know, because I talk to people that are over there, that admire us and respect us because of what we’ve done all year long. But what Manchester has done is incredible and should be recognized.

Q – The quality of Barcelona’s football is an extra plus?

M – The football that we are playing could make this an unforgettable year. But when the time comes to play a game like this what happened beforehand does not carry any weight. There are no favorites. In front of us we’ll have a tough rival, that plays at a great level. I like how they play. I enjoy watching them especially when Carlitos plays.

Q – Did you talk to Tevez? How do you view his present in Manchester United?

M – I didn’t get a chance to, but I find it hard to understand why there are doubts whether he will continue or not in Manchester. I don’t really understand what is happening. He is one of the best forwards in the world and I don’t know why he is not a starter. This past season, it was seen everything that he is capable of doing and the importance that his goals had. 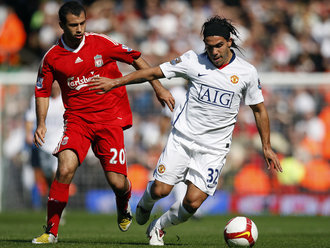 Liverpool midfielder Javier Mascherano is hoping for an Anfield reunion with his friend Carlos Tevez.

The Argentina captain and his international team-mate were briefly at West Ham together when they arrived in the Premier League in August 2006.

But now midfielder Mascherano, who joined Liverpool in January 2007, is aware of the speculation that he could be re-united with his striking colleague at Anfield.

Liverpool boss Rafael Benitez has been linked with a move for Tevez, whose loan deal at Manchester United ends next month.

Benitez pointedly refused to discuss names of his transfer targets after Liverpool’s final game of the season on Sunday when they beat Spurs 3-1 to clinch runners-up spot.

But there is little United boss Sir Alex Ferguson could do about such a move once the player’s loan is over.

Mascherano said: ”It would be great to have Carlos here with me, I know how good he is. But I don’t really know what the situation is, it is certainly a difficult one.

”I don’t know exactly what is happening. The only thing I can say is that he is a great player and a great person.”

Mascherano will at least be playing in the same side as Tevez next month, when Argentina have two World Cup qualifiers against Columbia and Ecuador.

He said: ”I will be with Carlos in the national team shortly, and we know we have to win important games and if we can get six points from our next two matches we will be closer to the World Cup.

”It’s important to win both games and see what happens, but obviously I want to be in South Africa for the finals next summer.”

Whether they can end up at Anfield together next season is a question for Benitez and Liverpool’s American owners.

But it is believed that Tevez does not want to move from his Cheshire home and intends staying in the Premier League if he does eventually leave Manchester United.

Mascherano admits to ”not feeling good” about Liverpool’s failure to land the title.

He said: ”We wanted to win the league and we were very close, but we accept that Manchester United did very well also.

”It is difficult to take, because if you look at the table and you see Liverpool with 86 points, that’s enough to win the league in many previous seasons.

”Previous champions have had less points than we had this season. But we have to improve, and we will be ready for next season after what has been a good campaign and better than the last four or five seasons beforehand.”

He added: ”It is not easy knowing you have really good players and you finish only second, it is difficult to understand.

”We will have to see what happens now. We have the squad to compete in the league, but maybe if some new players came to improve the team it would be great for us next season. It does not need improving too much, maybe a little bit.

”We need to improve at home. We dropped a lot of points at home because we didn’t have that experience to finish the games, but next season we will have the experience and maybe it will be better for us.

”You can see against the top sides we almost beat all of them. But at home we dropped a lot of points against Hull, Manchester City and Fulham. Winning those points could have won us the league.”

Carlos Tevez wants to help Manchester United retain the Champions League against Barcelona on Wednesday before giving any further thought to his future.

It is expected Tevez will leave Old Trafford next month, once his two-year loan deal expires. However, the 25-year-old is determined to put discussion about his future on hold until the Red Devils’ European fate is sealed.

”I want to win the European Cup for the club and the fans,” he told Zoo Magazine. ”After that we will talk about the future.

”I really like it here and want to be part of the success but right now I don’t want anything to distract me from my football.”

Tevez is in the happy position of counting both contenders for the title of best player in the world as team-mates.

Cristiano Ronaldo has been aiding United’s quest for an unprecedented double double, while Barca’s Lionel Messi will also be part of the Argentina squad aiming to win the next World Cup in South Africa.

Diplomatically, Tevez refuses to split them, although it is clear the winner of their personal duel stands an excellent chance of lifting the European Cup on Wednesday night.

”Everybody considers them to be the best football players in the world,” said Tevez.

”To have them both on the same pitch should be great entertainment for the fans.”

This is the list of players called up by Maradona for the next two WC qualifiers against Colombia and Ecuador.

Two players called up from the Mexican League. I can’t rememeber the last time that happened, if it ever happened. I really can’t say much about those players as I do not follow the Mexican league.

Bergessio & Otamendi played well against Panama and are being rewarded with a callup. Good for them.

Up until now Carrizo’s been the starting GK, it’ll be interesting to see what Maradona will do with Andujar who is in outstanding form in both the Argentine league and in the Copa Libertadores.

Will Carrizo no longer be the starting GK?

As far as the rest of the team, I think that just about everyone that should be there is there.

The only player that I would mention that isn’t on the list is Gonzalo Higuain.

Higuain was in good form and established himself with Real Madrid this season.

If Lisandro Lopez, Diego Milito, and Bergessio get called up, I think that Higuain deserves a callup as well.

According to a report in La Gazzetta dello Sport, Napoli turned down an offer of 22 million euros made by Liverpool for Ezequiel Lavezzi.

Napoli’s rejection of Liverpool’s offer is a clear indication of the impact that Lavezzi has made in his first season with the club.